Recap: Kickball for a Cause
16603
post-template-default,single,single-post,postid-16603,single-format-standard,bridge-core-1.0.7,ajax_fade,page_not_loaded,,qode-theme-ver-23.5,qode-theme-bridge,wpb-js-composer js-comp-ver-6.4.1,vc_responsive

Recap: Kickball for a Cause 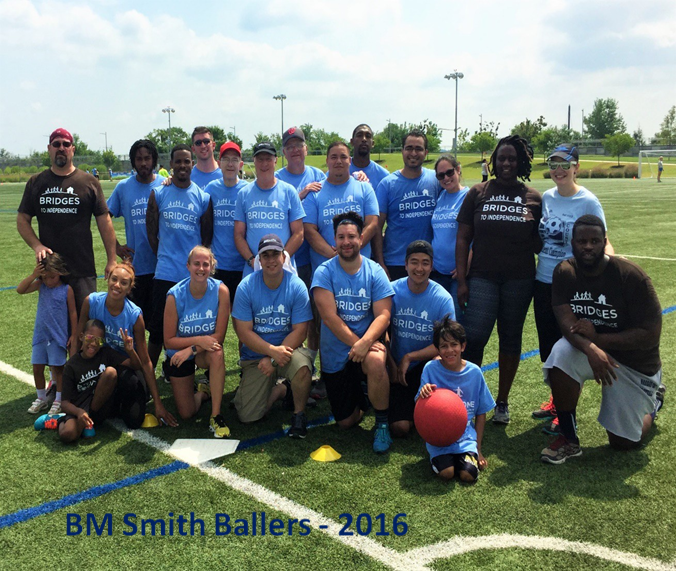 09 Aug Recap: Kickball for a Cause

Our team was excited for the privilege of playing in the 11th Annual Safe at Home Kickball Tournament benefiting Bridges to Independence, helping Arlington families out of homelessness.

Bridges to Independence (B2i) uses a unique approach in responding to homelessness within our community. They describe it this way:

“Our short-term goal is to help individual clients right now. Long-term we aim to break the inter-generational cycle of poverty by preparing today’s struggling kids to be tomorrow’s successful adults.”(B2i)

On Saturday, Aug 6th, the 11th annual  kickball tournament fundraiser took place at the beautiful Long Bridge Park in Crystal City, and many BM Smith team members and their friends and family were excited to participate. It’s already sweltering before the clock has even struck 9am! These guys keep smiling anyway.

This year was the largest tournament yet, including 27 teams! The BM Smith team had 27 people sign up, including family and friend of employees, which made for a great time. (Next year maybe we’ll have two teams??)

Every team started with at least 3 games to play, which they told us would each last for 40 minutes or 4 innings. If we were able to win our group, we would move on to the next round (this was the closest to playing in the World Cup as I’ll ever get!).

Almost immediately upon arrival, Neil and I ran into the winners of last year’s tournament who kindly notified us that our team was in the “group of death.” We remained positive and told each other that we were bound to have some beginners luck with underdog courage!

By 10:15 am, in spite of scoring first and many other valiant efforts, we had lost our first two games and took a break to enjoy the food trucks and other games around the park together. There was only one game left to determine our fate. Clark schools us all in life-size pong Some try to keep up with Clark…

Others accept Clark’s dominance and enjoy the food trucks

Our fortunes did not turn around and game three, unfortunately, was also a loss. However, somehow that did not dampen our team spirit! Congratulations to the DCGreeks.com team, who won the kickball tournament for the second year in a row!

If you’re interested in learning more about Bridges to Independence, volunteering, or taking a tour of their fabulous shelter, click here — groups and individuals are welcome to volunteer for their many programs and services!